For the majority of children we were teaching remotely. This involved a daily English and Maths live lesson as well as one other live lessons focusing on a  range of other topics such as French, RE, History, Geography and Science. We also celebrated Wellbeing Wednesday where all children tried to spend the day off the screen focusing on their wellbeing. We are so proud of all families and children for their resilience during this time.

Some wonderful work was completed during this time.

This half term the children have been busy learning and developing their friendships. They have learnt lots of new sounds and can use them to blend words for reading. They enjoy role play with their classmates and listen to each other's ideas to make up stories and role play scenarios. They have particularly enjoyed using the post office and have been inspired to write letters to send to friends and family. In Maths they have learnt about comparing amounts using the words more and fewer.

We have had a busy and exciting half term which began with the arrival of some eggs. We watched the chicks hatch and grow over two weeks and really enjoyed learning about the life cycle of a chicken. We were able to do some independent writing about them based on our careful observations and are now much more confident when writing making sure we use finger spaces and full stops and segment all the sounds we can hear in words. We have also been able to enjoy more activities outside and have been constructing some large building projects in the outside area as well as developing our gross motor skills through our physical play. We are getting much better at being collaborative learners and work together well when taking part in our independent activities at choosing time, such as ordering numbers 1-20.

This half term we have been really busy in Acorn class. In maths we have been learning about 3D shapes and have described them to our friends using words like edges, faces and vertices. We have played games with our friends and are getting really good at sharing and taking turns. We have also enjoyed watching our class’ tiny caterpillars develop from tiny creatures into butterflies and have observed and written about them. We have been inspired to sentences and are now starting to be able to use finger spaces and full stops more consistently when we write sentences.

Acorn class have had a busy half term and have settled in well to their new school. They have been making new friends and learning to work together as well as take turns to complete activities. They have enjoyed role play as staff in our pizzeria, police officers and at a campsite, amongst many other imaginative games! They have also enjoyed observing the seasonal changes and were able to talk about the world around them when we went on a walk around the school grounds. They have learnt many sounds in phonics and are able to identify initial sounds in words and are starting to blend the sounds they have learnt to read short words. They have also practised counting objects carefully one by one and matching them to numerals as well as making patterns with 2D.

This half term we have been observing the changes in caterpillars and tadpoles. This has inspired lots of independent writing and questioning from the children. We were happy to release our butterflies after watching their transformation from tiny caterpillars. In maths we have been solving lots of different problems such as doubling, halving, addition and subtraction. We are able to use concrete objects or count in our heads to help us solve problems independently.

This half term we have really enjoyed our theme of pirates and have incorporated it in our role play where we made our own props, writing where we wrote messages after our ship laden down with treasure crashed and understanding of the world where we tested different material to see which floated and which sunk. We have also been writing more independently and for different purposes such as get well cards and in number have been adding two numbers under ten and recording our work. International week was also a great success with the children sharing a special object from home with their class.

This half term we have looked at making patterns in Maths and have continued to build on our phonic knowledge.  We are now applying what we’ve learned in phonics sessions to our independent writing.  We have also talked about lots of different things as a class, such as how to treat others kindly and what kinds of toys boys and girls like playing with.

Acorn class had settled in really well by the end of the half term, making new friends and learning new routines. With everyone settled and happy they were able to learn in so many different ways. They have been learning lots of phonemes in phonics and started blending them for reading.

They have worked on counting using lots of different objects and have enjoyed taking responsibilities, like tidying up or washing the cups in the classroom. 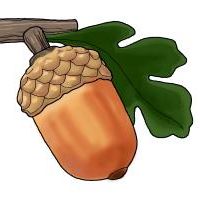