While Cedar class had their assembly, Maple class were taking part in the daily mile run every week!  The children showed great Perserverance and determination to show their running skills.

Before the half term both classes were preparing for their rooms to transform...... but into what they were all wondering?  Something tells me that they might have known a few things about it but . . . . . . . . . . . . update to follow! 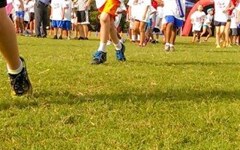 In Year 4 this term we had the opportunity to visit our allotment and plant some fruit and vegetables. We exercised our green fingers with some weeding, preparing the soil, planting and then maintaining the area. We hope to see some wonderful produce growing soon. Some of the fruit and vegetables we planted included various peas and beans, butternut squash, raspberries and blackberries and we even planted some lavender to help the bees.

Year 4 have had a very successful community project donating items to Food Bank Aid in North Finchley. Thank you for parental support with the project. We were amazed to find out that 4000 eggs and 500kg of potatoes are given out every week and a million pounds worth of food in a year! We also found out that some of the food donated goes to a homeless shelter. Before donating items, we researched what could be taken, thought about why people might need food banks in our current climate and wrote anonymous letters to those receiving our donations.