I'm Sticking With You by Smriti Halls

It's wonderful to have good friends to see you through the good times and the bad. But sometimes, friends can also be a bit . . . well . . . overbearing. 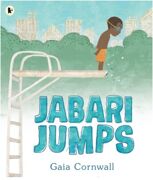 Jabari is definitely ready to jump off the diving board. He’s finished his swimming lessons and passed his swimming test, and he’s a great jumper, so he’s not scared at all. “Looks easy,” says Jabari, watching the other kids take their turns. But when his dad squeezes his hand, Jabari squeezes back. He needs to figure out what kind of special jump to do anyway, and he should probably do some stretches before climbing up onto the diving board.

Three short stories of primary school mayhem as 2F set out to solve the real mysteries of life.

Does the classroom hamster have magical powers? When Lauren swallows a fly, will she actually turn into one? And who, or what, is Robot Boy?

Look Up by Nathan Bryon

Meet hilarious, science-mad chatterbox, Rocket - she is going to be the greatest astronaut, star-catcher, space-traveller that has ever lived! But can she convince her big brother to stop looking down at his phone and start looking up at the stars?

Bursting with energy and passion about science and space, this heart-warming, inspirational picture book will have readers turning off their screens and switching on to the outside world.

Everybody Counts by Kristin Roskifte

This fun book will get you counting from 0 to 7.5 billion, but also to do so much more. Follow the characters’ stories through the book and see how their lives collide with others. There are a lot of secrets to be discovered, for the sharp-eyed! You will see that everyone is different and has their own life but most importantly, everybody counts.

A spotting section at the end allows you to go back and have even more fun. 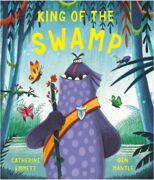 King of the Swamp by Catherine Emmett

McDarkly lives quietly all on his own, growing orchids in his dank swamp, until one day his peace is disturbed by an arrogant king who wants to turn the swamp into a roller-skate park.

McDarkly has ten days to prove that the swamp is not damp and dark, but an enchanted world. Can he do it, or will he risk losing his home forever?

Heather is a little girl who wants to go to Outer Space, where the stars sparkle with magic and wonder. When a spaceship lands at Cotton Rock, it seems that all of her dreams have come true.

But soon the alien has to leave. Will the spaceship ever come back? And if it does, is Heather ready to leave everything on Earth behind? 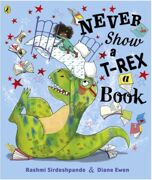 Never Show a T-Rex a Book by Rashmi Sirdeshpandi

What would happen if you showed a T-Rex a book? Well, she would not know what to do with it . . . would she?

A madcap, super silly adventure story rooted in the transformative power of books.

Bear wakes up early from hibernation. If she cannot sleep, then at least she can make a snowman. Rabbit has never made a snowman, but he definitely wants to make one that's better than Bear's.

But with an avalanche and a hungry wolf heading his way, Rabbit soon realises that it might be nice to have a friend on his side.

The Owl who was afraid of the Dark by Jill Tomlinson

Plop, the Baby Barn Owl, is like every Barn Owl there ever was, except for one thing, he is afraid of the dark. "Dark is nasty" he says and so he will not go hunting with his parents. Mrs Barn Owl sends him down from his nest-hole to ask about the dark and he meets a little boy waiting for the fireworks to begin, an old lady, a scout out camping, a girl who tells him about Father Christmas, a man with a telescope and a black cat who takes him exploring. He realizes that through these encounters that dark is super after all.

The Legend of Kevin by Philip Reeve

Max is a young boy living in an ordinary tower block. He longs for adventure in his life, then one day, DOOF! a flying pony called Kevin crashes into his flat, blown in by a magical storm!

The storm causes a huge flood and soon Max's town submerged by water. Luckily for the town, Max has a flying pony to come to the rescue, and luckily for Kevin, he has a new best friend and a constant supply of his favourite thing - biscuits.

"Stick Man lives in the family tree with his Stick Lady Love and their stick children three."

But it's dangerous being a Stick Man. A dog wants to play with him, a swan builds her nest with him. He even ends up on a fire!

Will he ever get back to the family tree in time for Christmas?

Sona Sharma's house is full. Relatives come unannounced, the phone rings frequently and friends drop in all the time. Then one day Amma tells Sona she is going to have a baby. Is that good? Sona is not sure, she has always enjoyed being an only child. Sona realises that her life is about to change, and while she is coming to terms with having to share everything, including Amma and Appa, her grandparents and her home. Sona Sharma wants to be the very best big sister she can be.

Half vampire, half fairy, totally unique! Isadora Moon is special because she is different. Her mum is a fairy and her dad is a vampire and Isadora is a bit of both. She loves the night, bats and the colour black, but she also loves the outdoors, using her magic wand and the colour pink. When it is time for Isadora to start school she is not sure where she belongs, vampire school or fairy school?

The Hat Full of Secrets by Karl Newson

Henry’s got a secret … a big one, and he does not know what to do with it.

Grandpa suggests he should keep it under his hat and he has got just the hat for the job.

But when Henry puts it on he discovers that Grandpa has some secrets of his own!

My Dad Is a Grizzly Bear by Swapna Haddow

Shhh. Beware. My dad is a grizzly bear.

In this family, it is just possible that Dad is a grizzly bear.  He has fuzzy fur, enormous paws and loves the outdoors. He sleeps a lot even in the cinema and when he is awake, he is always hungry, usually eating up all the honey.  What else could Dad be? But sometimes, when it is scary at night, a lovely big bear hug is just what is needed.