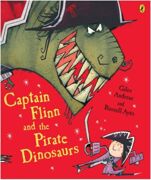 Captain Flinn and the Pirate Dinosaur by Giles Andreae

Flinn is at school looking in the art cupboard for some coloured pens to finish off his dinosaur drawing when he stumbles upon Captain Stubble, a real live Pirate Captain. He tells Flinn that his ship, the Acorn, has been stolen and that he needs Flinn to help him rescue it back. Stubble makes Flinn the captain and they sail away on an old pirate ship until they finally find the Acorn but, to their horror, realise it has been stolen by PIRATE DINOSAURS!

Fred may look ordinary, but sometimes people who look ordinary turn out to be not very ordinary at all, because it just so happens that Fred is a Wizard!  Sounds pretty great, right? Except that Fred is absolutely, completely, mind-boggingly TERRIBLE at magic.

So when he hears about a competition to meet Merlin (yes, THE Merlin!) Fred knows it is his one chance to prove that he is not the worst wizard in town. The catch? To win the competition he has to capture the tail of a terrifying, fire-breathing lizard!

When Gregory wakes up on his first day in Tobago with his grandparents, his heart sinks. The food is strange, the sun too hot, his cousin Lennox is on another wave length, and there are none of the televisions, video games and other high-tech gadgets that a cool city-boy takes for granted. How will Gregory adjust to the strange culture and learn to enjoy the lifestyle of the Caribbean.


Billy and the Beast by

The beast is making a terrible soup out of all of Billy and Fatcat’s friends. Luckily, our brave heroine Billy has a trick or two up her sleeve (or in her hair) to save all their friends.

The three little wolves erect first a solid brick house. The big bad pig comes along and when huffing and puffing fails to work, he uses a sledgehammer to bring the house down. Next they build a home of concrete: The pig demolishes it with his pneumatic drill. The three little wolves they erect a house made of steel, barbed wire, armor plates and video entry system, but pig finds a way to demolish it too. What will the Wolves do next?

The Enchanted Wood by Enid Blyton

When Joe, Beth and Frannie move to a new home, an Enchanted Wood is on their doorstep and when they discover the Faraway Tree, that is the beginning of many magical adventures! Join them and their friends Moonface, Saucepan Man and Silky the fairy as they discover which new land is at the top of the Faraway Tree. Will it be the Land of Birthdays, the Land of Toys, or even the Land of Ice and Snow with its magic snowman?

Lubna and Pebble by Wendy Meddour

Lubna's best friend is a pebble. She found it on the beach when they arrived in the night, then she fell asleep in Daddy's salty arms. Lubna tells Pebble everything, about home, about her brothers, about the war. Pebble always listens to her stories and smiles when she feels afraid. But when a lost little boy arrives in the World of Tents, Lubna understands that he needs Pebble even more than she does.

Marge in Charge by Isla Fisher

Meet Marge, the mischievous babysitter with rainbow hair who loves to make a mess and bend the rules. At dinnertime Chef Marge cooks up chocolate soup and at school Marge the Muscian conducts a chaotic concert in the playground!

Jake and Jemima have brilliant fun with their new babysitter, but will they manage to tick off all the jobs on Mummy's list?

The King who banned the D

There was once a boy who was afraid of the dark. There is nothing unusual about that, most children are. But this boy was a Prince and he decided that when was King, he would ban the dark. When he is King and bans the dark completely, installing an artificial sun enforcing "anti-dark" laws, it seems like a good idea. The citizens don't need to worry about monsters, crime, or any of the other scary things that might live in the dark. But what happens when nobody can sleep, and the citizens revolt? Will the King face his fears and turn the lights off?

Counting on Katherine by Helaine Becke

Katherine Johnson is the mathematical genius who helped make the historic Apollo 11 moon landing possible and made sure that Apollo 13 returned home safely when the mission was in critical danger.

As a child, Katherine loved to count. She counted the steps on the road, the number of dishes and spoons she washed in the kitchen sink, everything! Boundless, curious and excited by calculations, young Katherine longed to know as much as she could about Maths and the universe. . . . 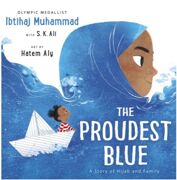 The Proudest Blue by Ibtihaj Muhammed

Asiya's hijab is like the ocean and the sky with no line between them, saying hello with a loud wave.
It is Faizah’s first day of school and her older sister Asiya’s first day of wearing hijab, made of a beautiful blue fabric. But not everyone sees hijab as beautiful. In the face of hurtful, confusing words, will Faizah find new ways to be strong?

Anna Hibiscus lives in amazing Africa with her mother, her father, her baby twin brothers and lots and lots of her family. Join her as she splashes in the sea, prepares for a party, sells oranges and hopes to see sweet, sweet snow!

Mango and Brash are the InvestiGators: sewer-loving agents of S.U.I.T. and scourge of supervillains everywhere.

With their Very Exciting Spy Technology and their tried and true, toilet-based travel techniques, the InvestiGators are undercover and on the case!

Can Mango and Brash uncover the clues, crack their cases and corral the crooks? Or will the criminals wriggle out of their grasp?

Oliver and the Seawigs by Philip Reeve

Along with his new friends, a grumpy old albatross, a short-sighted mermaid and a friendly island called Cliff, Oliver goes off in search of his missing parents.

But before he can put his rescue plan into action there's the evil Stacey de Lacey and an army of greasy, green sea monkeys to contend with.

The Bear and the Piano by Daviod Litchfield

One day, a young bear stumbles upon something he has never seen before in the forest. As time passes, he teaches himself how to play the strange instrument and eventually the beautiful sounds are heard by a father and son who are picnicking in the woods. The bear goes with them on an incredible journey to New York, where his piano playing makes him a huge star. He has fame, fortune and all the music in the world, but he misses the friends and family he has left behind.

Claude at the Circus by Alex T Smith

A walk in the park leads to a walk on a tightrope when Claude joins a circus, throws custard pies and becomes the star of the show.